someone put steel wool around the cell and when it receives it lights up the wool. So what does it do to your brain? {wait past the ad]

This is the best video on electronics and “digital dementia” done in the UK… sometimes a little slow but if you can’t watch all of it… just check out these parts.

Many scientists say exposure to electromagnetic fields may pose a health hazard. They’re especially concerned about cellphones, because of their position close to the user’s head.

A California health activist says the Massachusetts Department of Public Health may be withholding information about possible health risks posed by cellphones and other wireless technologies.

Joel Moskowitz, director of the Center for Family and Community Health at the University of California Berkeley, said the state agency is refusing to release fact sheets about the health effects of electromagnetic fields, or EMF, that it began drafting two years ago.

“The higher-ups are very nervous about letting any of this information out to the public,” said Moskowitz. In California, Moskowitz fought a successful seven-year court battle to force that state to release guidelines for consumers on safe cellphone use.

Ann Scales, a spokeswoman for the Massachusetts agency, said the DPH plans to release the guidelines within six months.

Moskowitz and some other activists assert that exposure to EMF, the energy given off by countless modern devices, causes a variety of health problems, ranging from sleep loss to brain cancer. They say state and federal agencies have a duty to warn the public to reduce their exposure to EMF.

But both the World Health Organization and the US Centers for Disease Control and Preventionhave said that evidence of health risks from EMF is inconclusive.

Moskowitz has joined forces with Cecelia Doucette, an Ashland resident and EMF activist who persuaded her town’s school district to set limits on student exposure to Wi-Fi radio waves. Doucette said she worked with Mass. DPH officials in 2016 to develop a fact sheet showing people how to shield themselves from Wi-Fi waves, as well as electromagnetic radiation from cellphones, cell towers, and high-voltage electric power lines.

But more than two years later, the fact sheet has yet to be released. “I don’t know why,” Doucette said. “They have not given me a reason aside from the fact that it is still under review.”

Moskowitz filed a public records request for the fact sheets with the Mass. DPH, but it was denied. Public records liaison Carolyn Wagner wrote that the document in question is exempt from the state’s disclosure law because it’s still in draft form.

Scales said that until the DPH releases its guidelines, consumers can find out about safe cellphone use from the National Institutes of Health’s National Cancer Institute, which has a Web page devoted to the subject.

Many scientists agree that EMF exposure may pose a health hazard. They’re especially concerned about cellphones, because of their position so close to the user’s head, thereby increasing the brain’s exposure to the phone’s electromagnetic field.

“The evidence that prolonged use of cellphones increases the risk of brain cancer is extremely strong,” said David Carpenter, professor of environmental health sciences at the University at Albany, State University of New York.

Carpenter pointed to recent large-scale studies in the United States and Italy that found that exposure to cellphone radio waves caused brain tumors in rats, as well as earlier studies that found evidence of increased cancer rates among heavy cellphone users.

“The degree of risk is debatable,” Carpenter said. “However, that there is a risk is really pretty clear.”

Richard Clapp, professor emeritus at Boston University’s School of Public Health, agreed. He recommended that consumers use wired earbuds to make calls instead of holding the handset to their ears.

“There’s good reason for being cautious,” Clapp said. “If you don’t have to expose yourself or you can reduce your exposure, do that.”

The controversy is likely to intensify in the years ahead with the deployment of next-generation 5G wireless systems, which operate at higher frequencies than today’s cellular systems and will require a far more transmitters.

“5G is going to put an antenna every several hundred yards in cities,” Moskowitz said. “The exposure will be substantial.”

The nation’s wireless companies plan to spend billions on 5G networks, and the Trump administration considers quick deployment of the technology a matter of national security. But Markowitz and other health activists want a moratorium on 5G technology pending more research on health risks.

CELLPHONES SCHOOLS: Addictive, obtrusive and anti-social: why are we still allowing mobile phones in schools?

The French government, like more than a dozen countries, has legislated to ban all students under the age of 15 from using smart phones in school.

Apart from protecting children from physical harm, the French Education Minister Jean-Michel Blanquer told News.com the move was designed to limit distractions and cyberbullying, as well as encouraging children to socialize

A recently published Chinese study has now found strong evidence linking cell phone radiation to headaches in children and adults. This 2017 study, which carried out a systematic review of some 2699 previous studies going back to 1990, also found a dose-response relationship between the risk of having a headache and duration of cell calls and frequency.

A 2016 Korean study examined a number of variables, stress, sleep, cognitive function, and depression, but found that cell phone call duration to be the main determinant of the severity of headaches.

A major Danish study on some 52, 000 children enrolled pregnant women had similar findings. Then when their children reached the age of seven, the mothers completed a questionnaire regarding their child’s health. It was found that children with cell phone exposure had higher odds of headache-related symptoms than children with no exposure.

In 2003, TNO Physics and Electronics Laboratory published the results of a study commissioned by three Dutch ministries on cell towers. (4,5)  found that cell phone radiation can cause headaches and nausea. It also found a link with other symptoms such as dizziness fatigue, weakness, and muscle pain – despite a lower dose of radiation than that of cell phones being used in the study. 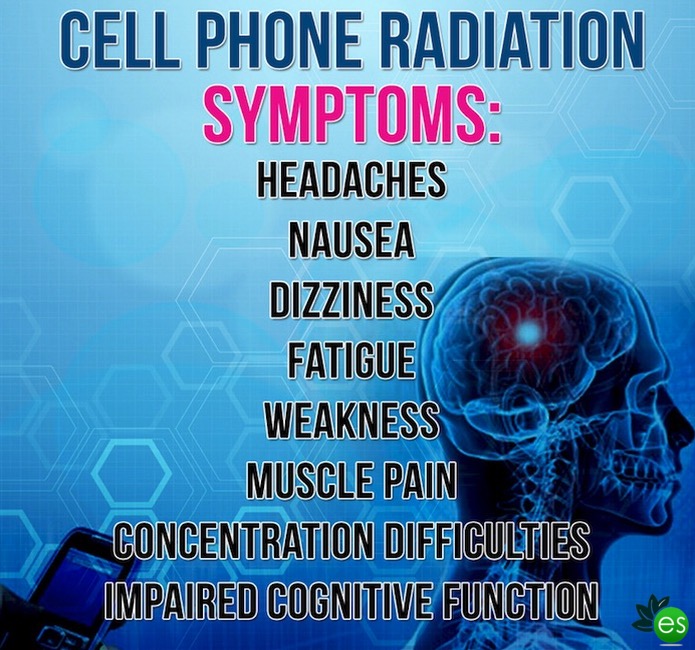 An Act relative to the safe use of hand-held devices by children https://malegislature.gov/Bills/190/SD2053
Chapter 93 of the General Laws is hereby amended by inserting after section 114 the following new section:-

Section 115. All mobile telephones sold or leased at a point of sale or retail establishment in the commonwealth shall clearly and conspicuously disclose, on product packaging, the following notice to consumers:-

“To assure safety, the Federal Government requires that cell phones meet radio frequency (RF) exposure guidelines. If you carry or use your phone in a pocket or the phone is otherwise in contact with your body when the phone is on and connected to a wireless network, you may exceed the federal guidelines for exposure to RF radiation. Refer to the instructions in your phone or user manual for information about how to use your phone safely.”